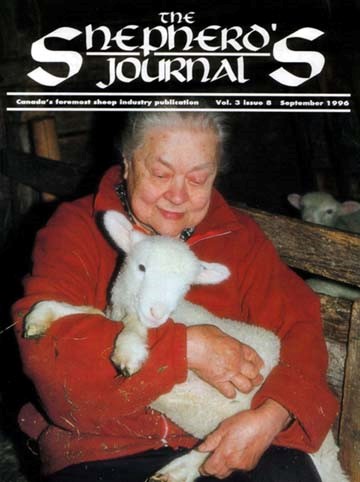 The Edith Zillig Sheep Fonds was established at the Faculty of Agriculture as part of the Agricola Collections in the summer of 1996, and the collection was updated again in 2004 to include new items.

The materials in this fonds were actively collected by Edith Zillig from 1987 onwards. They were donated to the MacRae Library Archives in various stages since 1989.

Most of the material was not created by Edith Zillig. However, the collection does reflect Mrs. Zillig's work within the Nova Scotia sheep industry. It was created by various governments, councils, associations, companies, and universities, both within and outside of Nova Scotia.

Edith Zillig was born and raised on a farm in the province of Pomerania, Germany. She studied at the Agricultural College of Potsdam, becoming a farm manager in various parts of the country upon completion of her studies.

In 1954, she immigrated to Canada and landed in Cape Breton. The following year she married Gernot Zillig, who had emigrated from Germany earlier. In 1958, the Zilligs moved and settled on their farm at Scotch Village, Nova Scotia. They raised sheep with other livestock, starting with six Suffolk.

During the 1950s and 1960s, Edith and her husband belonged to the provincial sheep farmers' association, which later became the Sheep Producers' Association of Nova Scotia (SPANS) in the 1970s. She became an active promoter of the Nova Scotia sheep industry through their Sheep Fairs from 1973 to 1983 and she served as director of SPANS during the mid-1980s.

Starting in 1981, Edith also served as Western Director of the Nova Scotia Wool Marketing Board until she retired in 1993. In addition, she maintained an interest in the Purebred Sheep Breeders' Association of Nova Scotia, of which her husband served as its first president in 1980.

Since her husband's death in 1992, Edith still farms and raises sheep in Scotch Village, Nova Scotia, with the help of her son Manfred and her daughter Margaret.